Nearly half of the adults in the USA want to lose weight, with most of them being women. Unfortunately, when it comes to losing weight, women tend to find it a lot more difficult than men – even when following an identical diet and exercise routine.

Men are fortunate that, thanks to their body composition, they naturally sport more lean muscle as well as a higher metabolic rate than women.

While this may be somewhat discouraging to women wanting to lose weight, there are many tools that can be utilized to maximize weight-loss efforts. One of these entails the use of a powerful peptide known as Ipamorelin, which can be of great benefit to a woman looking to improve her physique.

What exactly is Ipamorelin?

Ipamorelin is a pentapeptide that is made up of five amino acids, and is widely considered to be one of the most beneficial peptides in the growth factor family. When injected into the body, Ipamorelin triggers an increase in growth hormone (HGH) secretion by stimulating the pituitary gland.

Although the increase in hormone secretion is similar to that of other peptides in its class, it does not boast the same appetite stimulation and increased prolactin, cortisol, aldosterone and acetylcholine levels. Ipamorelin is also widely considered to be the mildest and safest growth hormone-releasing peptide (GHRP) according to Fitness Edge, which would explain its increasing popularity among both men and women wanting to lose weight and improve their physique.

One of the greatest advantages of Ipamorelin’s use is its ability to promote faster weight loss. Low growth hormone levels are very common among overweight and obese individuals, which will make it increasingly difficult for them to lose weight.

In order to shed weight, the body has to be able to effectually break down lipids through a process known as lipolysis. The increased growth hormone secretion triggered by the Ipamorelin will accelerate lipolysis, thus making it easier to lose weight fast. It is, however, important to remember that Ipamorelin will only be effective when used in conjunction with a low-calorie diet and suitable exercise regime.

Apart from making it easier to lose weight, Ipamorelin can also help increase the amount of lean muscle in the body. While bodybuilders have relied on Ipamorelin to boost their muscle growth prior to a competition for quite some time, they are not the only ones that can benefit from increased muscle mass.

When your muscle mass is increased, your metabolism will also be boosted, which then makes it increasingly easy to lose weight. A faster metabolism will result in an increased number of calories burned, both while exercising and while resting, which typically makes it easier to adhere to a healthy lifestyle that is conducive to maintaining a healthy body weight.

Countless women dream of losing weight, and a reputable product like Ipamorelin can make it possible. Always remember that any weight-loss aid can only be effective when used alongside a balanced diet and sufficient exercise. Can CBD Help With Weight Loss? 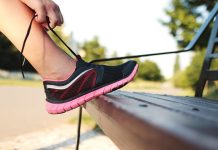 Weight loss for women over 40

The basics of successful weight loss