You’ve probably wondered this already while shopping for a pair of athletic shoes, but have you dug deep into what the difference between running, cross training, and tennis shoes are? To be perfectly frank, they all look extremely similar.

All of these shoes have that familiar toe cap at the very front. The midsole is comprised of generous cushioning and most are well-ventilated.

So it’s completely understandable if you’re a bit confused about what makes which shoe which. Thankfully, there are subtle differences that separate one shoe from the next, and the role they play can be quite specific and large for a sport. Care to find out what those differences are?

Running shoes are built for running. That should be pretty apparent. Since all you’re doing is moving forwards, running shoes help to give you support and stability. Lots of forefoot cushioning is key here. It’ll protect your feet from impact with the ground and helps your foot follow its natural running gait.

Running shoes also have what’s known as a “heel drop”, which is the distance between the heel height and the toe height. Running shoes have higher heel drops for added comfort. They are also extremely lightweight to keep you light and agile. Too much excess weight can slow you down in general.

With all that said, running shoes should not be worn for anything other than running (and we mean for running forwards only). It increases the chance of injury and they just aren’t designed for other forms of exercise.

Tennis shoes are made a little differently. Aside from standing up to the rigors of the tennis court, tennis shoes focus more on lateral support and stability.

Since most action in tennis consists of side-to-side movements, emphasis is put on helping the athlete’s foot move from left to right and vice versa and reducing the chance of injury while doing so.

The outsoles on tennis shoes also feature intricate tread patterns (the most common is herringbone pattern) to provide the necessary traction on courts. Constant running on tennis courts wears down the outsoles, which is why they are equipped with non-marking outsoles that are firmer and more durable. The midsoles are also flatter than running shoes, helping to keep you more stable.

Being lightweight is also important for a pair of tennis shoes, but not as important as in a pair of running shoes. All in all, you should only be using tennis shoes for tennis. The outsole of a tennis shoe is specific to tennis only and won’t work for other sports.

Last but not least, you have cross training shoes. Cross training shoes are a strange mix of a lot of different traits. They are made for multi-directional movement and feature a good amount of lateral stability and general support. They also have a wider base but are not as flexible as running shoes.

They are meant to be efficient multi-taskers, meaning, you’re able to wear them between different disciplines. Aerobics, jogging, weight training, or kickboxing are just a few things you can do in cross trainers. You can also play a light game of basketball or tennis on occasion if you wanted to.

The only problem with them is that they don’t excel at any one sport. They aren’t made to perform like that.

If you are really committed to a sport and want the best performance available, it’d be wise to consider a dedicated pair of shoes that is dedicated to that sport only. But if you’re more into casual athletics and participate in multiple forms of exercise, cross trainers are probably for you. Stretches for Stress Relief: 8 Poses That Will Help Alleviate Your Anxiety 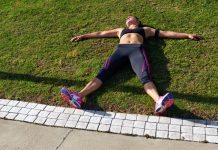 Transforming Your Outdoor Space Into A Workout Area Big Data And Sports: A Match Made In Heaven